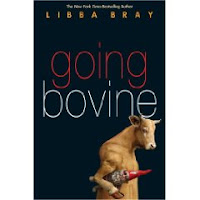 About the Book (From GoodReads): A dark comedy about a 16 year old boy named Cameron who has mad cow disease and a 16 year dwarf named Gonzo who he met in the hospital. Gonzo is a video gamer who thinks that everything is trying to kill him. Cameron has visitation from a punkish angel named Dulcie who has a propensity for spray-painting her wings. They are all on a mission to get to Disneyworld.

GreenBeanTeenQueen Says: Ok, I might get yelled at by a lot of people, but I wasn't in love with A Great and Terrible Beauty. I liked it, but it wasn't my favorite. I'm interested in seeing what Libba Bray does with a contemporary setting. 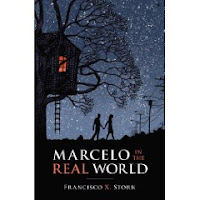 Marcelo in the Real World by Francisco Stork

About the Book (From Amazon): Marcelo Sandoval hears music no one else can hear--part of the autism-like impairment no doctor has been able to identify--and he's always attended a special school where his differences have been protected. But the summer after his junior year, his father demands that Marcelo work in his law firm's mailroom in order to experience "the real world." There Marcelo meets Jasmine, his beautiful and surprising coworker, and Wendell, the son of another partner in the firm.

He learns about competition and jealousy, anger and desire. But it's a picture he finds in a file -- a picture of a girl with half a face -- that truly connects him with the real world: its suffering, its injustice, and what he can do to fight.

GreenBeanTeenQueen Says: I've heard some buzz about this one and read some great reviews, so I really can't wait to read this one. Plus, I'm interested in see how Marcelo compares to other austic book characters.