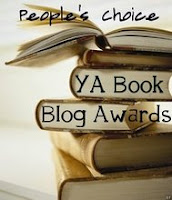 The fabulous Steph at Hey, Teenager of the Year has organized a people's choice blog award. The nominations are up and the voting has begun! Voting is open until May 15, so head on over to Hey, Teenager of the Year and cast your vote. I think this is a great idea, but it was really hard to vote because so many blogs I love were on the list.
And guess what? I got nominated for best reviewer! Thanks to whoever nominated me-that just made my day!:)
P.S.-Five days until my nerdy bookish wedding!!! :)