About the Book: Final book in the Georgia Nicolson Series.

GreenBeanTeenQueen Says: I know I'm not all the way caught up on this series, but I've loved the ones I've read, so I'm hoping to read the rest before #10 comes out. 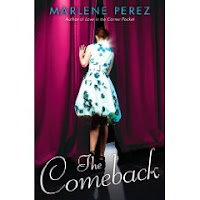 The Comeback by Marlene Perez
Release Date: 8/1/2009
About the Book: Sophie Donnelly is one half of the most popular and powerful couple in school, until new girl Angie Vogel shows up and compromises everything. Angie steals Sophie's starring role in the school play, and, worse, her super-popular boyfriend. Sophie has been quickly dispatched to social Siberia, but not for long--she'll do anything it takes to make a triumphant comeback.
GreenBeanTeenQueen Says: I was a drama nerd in high school, so I enjoy books about school plays, drama nerds and all the drama. Plus, that dress is adorable and I so want to wear it!!!
Not a book, but I really want to see this movie! Anyone else?