October 06, 2010
My teens are always raving about how much they love Cinda Williams Chima's books. I met Ms. Chima at ALA last year and she was so incredibly nice! I got an advanced copy of The Demon King which was immediately snatched up by my teen readers and I haven't seen it since! They keep telling me to read the book, but I just haven't had the time. Well, I finally made time and I started reading The Demon King and I have to tell you, I should have listened to my teens all along! I'm not yet finished with the book (see Monday's post about getting a new puppy-that's been taking up my reading time!) but I am really enjoying the book. I'm not the biggest fan of fantasy, but that's what makes The Demon King so great-it's accessible to readers of genre. Now the sequel, The Exiled Queen, is being fought over by my teens!

And if I thought I liked Ms. Chima before her guest post, she's even higher on my list of amazing authors after this amazing guest post! I think you'll find her even more awesome after reading it too!

For Love of Libraries

The first library I really remember was in the small town of Medina, OH, when I was in the fourth grade. We had recently moved from my hometown, and I was lonely and heartbroken over leaving m

y friends behind. And so I read—no—devoured books. Nothing else transported me away from misery as effectively.
The library was a red brick building built in 1907, and pretty much original at that time. It stood two doors down from Garfield Elementary school, so I could walk over after school, if I wanted.
The children’s section was just inside the front door, close to the checkout desk. I would sit on the battered floorboards next to the shelves, and pull books onto my lap. Every time I went, I took home an armload. During one summer reading program, I read seventy-five.
You see, I owned very few books of my own—a few Weekly Reader Bookclub choices, a hardcover of Black Beauty, a collection of fairy tales with a scary cover, and a Tarzan book my aunt gave me for Christmas.
Though my mother was a book-lover, she couldn’t afford to buy many books, either. I remember that we had some Reader’s Digest Condensed books. They were lined up on the bookshelf in the living room, their matching covers stamped with the titles—four or five books to a volume. They were shelved next to the Funk & Wagnall’s encyclopedia that they gave away at the grocery store, a different volume each week.
My mother owned a few best-sellers of the time— Ian Fleming paperbacks and massive hardcovers by James Michener and Taylor Caldwell. In fact, I was named after a character in one of those books—Ben Ames Williams’s House Divided. My mother liked the character, and she liked the name, and so I was named “Cinda,” along with a handful of other girls of similar age. It was the golden age of Cindas, apparently.
All of my other books, I found at the library—Old Yeller and Beezus and Ramona and My Friend Flicka, the Hardy Boys and Nancy Drew books that I chomped down like popcorn.
And, later, fantasy—The Crystal Cave, The Hollow Hills, and The Lord of the Rings. I was enchanted by authors like Mercedes Lackey and Marion Zimmer Bradley and David Eddings.
Libraries saved my life by taking me away at a time when I really needed it. They changed my life by opening the door to a different world. Though I struggled in early elementary school, I 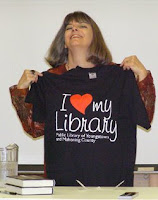 became an honors student by the time I graduated from high school. My brother and I were the first in our family to graduate from college.
Neil Gaiman describes himself as a “feral child,” raised amid the stacks in a library. I am much the same, myself.
Read my love note to librarians here. http://cindachima.blogspot.com/2008/03/love-note.html

The Demon King is now available in paperback, and The Exiled Queen released September 28.
There will be four books in the Seven Realms series, followed by two more Heir books.
Excerpts from each of my books are available on my website, http://www.cindachima.com/. Help for writers can be found under Tips for Writers, including a document called, “Getting Started in Writing for Teens.”
I blog at http://cindachima.blogspot.com/, where you’ll find rants, posts on the craft of writing, and news about me and my books.
Thanks Cinda!! You are so awesome and I'm glad you got to visit your library and now are writing great fantasy books that even readers like me enjoy!:) Now go visit her blog, read her books, and say thanks for supporting libraries!