October 05, 2010
Tween Tuesday is a weekly meme hosted here at GreenBeanTeenQueen to highlight

great reads for tweens! Join the fun and leave your link below!

About the Books: The children of Greek gods attend a special academy just for them called Mount Olympus Academy. They study everything they need to know about mortal manipulation, beauty and inventions. Each girl has a story of her own-Athena didn't know she was a goddess and she's always been the smart brainy one, but now she's behind at MOA! Persephone tries to please everyone, but when she meets bad boy Hades, she finds she can finally be herself. And Aphrodite only wanted to help out a friend, but her makeover is giving her some unwanted competition!

GreenBeanTeenQueen Says: Since Percy Jackson hit the big time, I've been combing my library for fun humorous takes on Greek mythology. I'm a big fan of the new Goddess Girls series! These books are perfect for young tweens and early readers wanting some books about Greek mythology but maybe aren't quite ready for the Percy Jackson series yet. Or even if they are older readers looking for more to read, I'm sure they'll enjoy the Goddess Girls.

Each book is fairly short and has plenty of humor. I love the way the authors modernize the characters. Medusa is the mean girl bully at school, Poseidon is the cute crush, Hades is the misunderstood loner. Each book also takes on familiar myths and explains them in a new way. We learn how Medusa got her snakes and how the Trojan War really happened.

Even though there is a series, each book can easily stand on it's own, so there's no need to read them in any particular order. A fourth Goddess Girl book is due out later this year and I can't wait. I'm passing these onto my family friends who are always looking for great books to read and I know they'll have them read in no time-they're going to love them! If you need to add more Greek mythology books to your collection, consider adding these for younger readers.

The authors of Goddess Girls are hosting a giveaway! They've got a cute Aphrodite Swag Bag up for grabs and you're going to want it! These bag has all sorts of great stuff-makeup, a bracelet, and a copy of Aphrodite the Beauty! Want to win? Leave a comment below telling me what Goddess Girl you think you would be! (And yes, you can pick one that's not in the books) 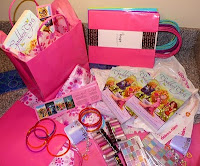 -One entry per person!

Full Disclosure: Reviewed from copies sent by author for an honest review