Amiri and Odette: A Love Story by Walter Dean Myers 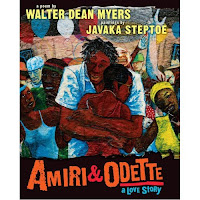 Rating: 5/5 Stars
Genre: Urban Contemporary/Poetry
Release Date: 1/1/2009
About the Book: An updated re-telling of Swan Lake, set in an urban neighborhood and told in verse.
GreenBeanTeenQueen Says: I picked this one up mainly because it was on my cart of new books at work and because it was an updated version of a story typically told through ballet-this seemed like an interesting concept and I wanted to see how Myers pulled it off. Plus, the artwork caught my eye!
The story is told beautifully, and even though the book is short-coming in at 40 pages-it's a powerful one. Swan Lake is a housing project and Amiri's mom is worried he won't settle down with the right girl, so she opts to throw him a party. Amiri meets Odette, but instead of being cursed to turn into a swan, in this tale, Odette's curse is a drug addition and she can't escape the clutches of the dealer Big Red.
I really didn't know much about the story of Swan Lake, which I read the summary of after I read this one and I think I should have read it before. Since I knew it was based on Swan Lake, I kept taking some of the things as fantasy and kept thinking about the swan curse, because that's what I knew of the story, so I wasn't really clear on Odette's drug addiction until the end. I guess I just need some things spelled out for me sometimes!!
I really loved the artwork-the artist makes it look like graffiti and the paintings were done on asphalt, which has a really cool effect.
This is a quick read, and it's worth it!